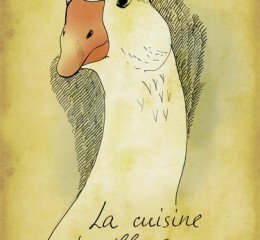 In the wild, the goose is a great migratory animal. So, before embarking on its long journeys, it fattens itself. Man has observed, imitated and exaggerated that practice;

Whether or not it pleases those in Alsace or the south-west of France, it is a fact that making foie gras originally derives from ... Egypt. In the mural paintings of a necropolis in the Memphis region of Lower Egypt (dating from 2500 BC) we see evidence of the forced-feeding of geese. The Egyptians fed their animals roast cereals. Until Roman times, it appears that the objective of the forced-feeding was to produce animal oil for conservation purposes and as fuel for lamps, and not for eating the liver. For the Jewish people, this fat would be a substitute for butter or lard, the use of which was forbidden under their religion. They therefore promoted the forced-feeding of geese.

The liver started to be eaten in Roman times. Geese and other birds were force-fed with dried figs (from Latin ficatum) – which could be the origin of the French word for liver (foie). Forced-feeding to increase the fat has continued. But, until the discovery of America, it was done with the help of figs or cereals (mainly moistened wheat). Maize was later imported from Mexico.

From the 18th century, recipe books start using foie gras: strained, on a spit or in a shell.

Today, France is the leading foie gras producer in the world (74% in 2004). The main production areas are in south-west France (Landes, Pyrénées-Atlantiques, Gers and Dordogne) and, to a lesser extent, Alsace. Duck represents the largest part of the foie gras production. France exports on average more than €100 million worth of foie gras every year – the main importers being Spain, Belgium, Japan and Switzerland (in that order).

The French national pride at being the nation of foie gras is enhanced by it being of such major economic importance. Without doubt, that's why since the passing of the January 2006 Law stating that 'Foie gras belongs to France's protected cultural and gastronomic heritage'.